Based on the Paramount movie and original screenplay by Douglas Day Stewart, An Officer and a Gentleman The Musical brings a movie classic to the stage. But despite big hits, big sets and generous drama, it doesn’t quite deliver the magic of the movie it emulates through relatively close adaptation. With Book by Stewart and Sharleen Cooper Cohen and direction by Nikolai Foster, this is a busy, energetic show which flits back and forth between the lives of our increasingly intertwined protagonists. The speedy pace allows the production to include an impressive number of classic 80s hits like Material Girl, Livin’ on a Prayer, I Want to Know What Love Is and of course Up Where We Belong – a song for ever connected with this story thanks to Richard Gere et al on the big screen. This show is a definite crowd pleaser and throws everything into creating a deeply dramatic (at times even melodramatic) love story on a grand scale, but the extreme artifice (I know, it’s a musical – but even for a musical -) of the almost constant video projections (Douglas O’Connelland) and constant shifting of the focus are sometimes a blockade to the rather important drama of the story. Leads Emma Williams and Jonny Fines, playing troubled lovers Paula Pokrifki and Zack Mayo, carry the story with passion and clarity. Zack Mayo has had a rotten childhood thanks to both absent mother and drunkard father (played with a permanent petulant chip on his shoulder by David Burrows) and has now decided to pull his socks up and become an Officer – much to the irritation of full volumed Sergeant Emil Foley, played by Ray Shell. Zack is a schemer and an opportunist, testing the many rules of military training with his seasoned knowledge of how to get by on very little. In the local bar, he meets Paula and the pair embark on a fling which neither dares to declare a relationship but alas, the fun and the lust soon becomes love and heartache. For Paula, history repeats according to Aunt Bunny (Corinna Powlesland) and her mother Esther Pokrifki (Rachel Stanley); the child of a soldier trapped by her mother through pregnancy, she finds herself drawn to the uniform but unwilling to repeat the scheming ways women before her have secured a military man. Williams impresses with a belting, powerful voice with great range and performs a moving performance of Alone before being joined by Stanley for a duet of Don’t Cry Out Loud – uneven but uplifting in its harmonic big notes. Fines’ vocals on Blaze of Glory and St Elmo’s Fire leave a solid mark on the production and there is easy chemistry between our much-tested romantic leads.

By far the best dramatic performance comes from Keisha Atwell who plays spirited and determined Casey Seegar – a woman from Compton; all swagger and empty bravado who, like Zack, is desperate to free herself from her upbringing to build a bright future for herself. She’s alone in a world of men on the training course and is tested to her limits; it’s a minor sub-plot made notable and impactful by Atwell’s strong performance – including some beautiful, heartfelt vocals. In the same way, Zack’s pal Sid Worley is played wonderfully by Ian Mcintosh, whose portrayal of the flip side of the coin when it comes to romances for military men in training is one of the most impressive performances to see seen in this production. After a brief fling with Lynette Pomeroy (Jessica Daley), Worley must make a decision and that decision leads to a gripping and powerful performance of Family Man, with husky vocals and all out belting providing an unmistakeable highlight of this show. 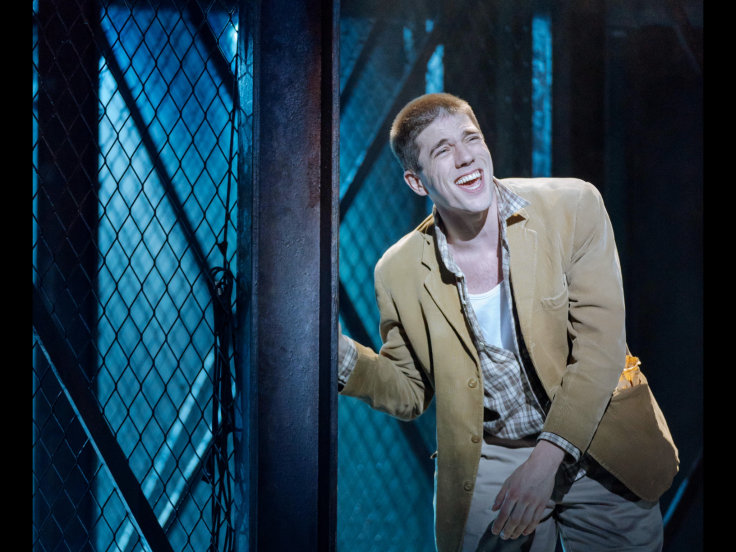 Kate Prince’s choreography provides some good strong visuals as she makes full use of the military theme – uniform men in uniforms uniformly move in synchronised sequences – and yes, with military precision. Canon and synchronised moves demonstrate perfected timing and deliver particularly well in The Final Countdown sequence. That said, there are also a few lack-lustre numbers – namely the factory girls’ performance of It’s a Man’s Man’s World, which is clunky and drags a little as they take a distractingly long amount of time to pack a few envelopes at a time into boxes – but I’ll submit and say that their later performance of Up Where We Belong redeems them. Set and costume designer Michael Taylor captures the period smoothly through simple civilian clothing contrasted with the pristine perfection of those white uniforms. 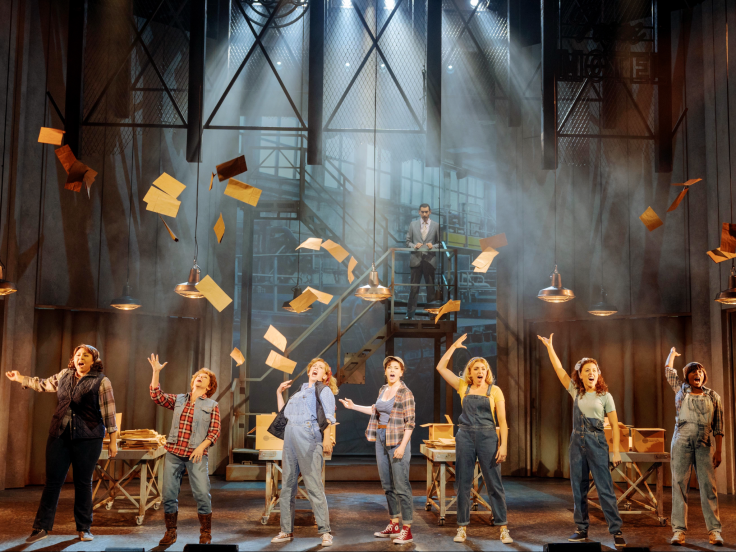 Taylor’s set pieces are relatively basic, with platforms and no embellishment at all – it’s a vision of the bare necessities championed in the barracks and I might even go so far as to say that there’s a nice correlation between a set bereft of comfort and the emotionally challenged characters using it. The car…is too naff to comment on but the motorbike is a nice touch to introduce Zack as our archetypal ‘bad boy’. But it is the constant use of projected Video design (Douglas O’Connell) which interferes with the good set design – the projections initially work well; a montage of popular culture plays on a screen to open the show, perfectly placing us within a specific time frame; shots of characterless concrete buildings indicate the training programme environment and one scene sees a backdrop of equations as the recruits work through the daily grind of training. But then there are videos taking every cheesy cliché and offering them up proudly, seemingly unaware of the damage such things do to the overall sense of quality; an ocean splashing away as the lovers deliver their scenes of passion being one particularly painful recurring image of cheesiness of the highest order… But again, I’ll chastise myself on behalf of all lovers of cheesy big crowd-pleasing musicals – it’s not a serious drama and it captures the sense of fun required from any big show like this, but it has to be said that in doing so, the central dramatic story loses traction at key moments.

An Officer and a Gentleman The Musical is a busy piece on a clear mission to please the big crowds with its big ambitions; it crams in a generous number of hits we all know and love, offers up some brilliant vocal performances and a good central narrative – if unapologetically cheesy romance and 80s hits are your thing, this show is for you!

This Curve Production of An Officer and a Gentleman is presented by Jamie Wilson with Gavin Kalin, Jason Haigh-Ellery, Anthony Clare and Broadway Baby Productions. It runs at The Grand Opera House Leeds (tickets here) until April 28th 2018 when it will continue its national tour.