Tmesis Theatre’s Happy Hour has plenty going for it; fearless and dynamic use of physical theatre and subject matter that is both relevant and prevalent in modern society. The workers on Level 3 are puppeteered by God-like voices (Rob Bond and Mary Pearson) coming through an intercom- connected to the constant surveillance of two nosy CCTV cameras in the office. They have a quota of smiley faces to achieve and each face achieved is celebrated with a round of applause (literally – in clockwise motion if you please). Directed by Elinor Randle, Happy Hour offers seventy minutes of abstract material ranging from hilarious satire to plain silliness. Chris Fittock’s text seeks to mock office culture and the pressures on everyday workers flippantly handed down by managerial puppets with broad yet fake smiles. It nicely pinpoints the irony of hierarchies in companies; every leader is accountable and therefore every leader in turn torments those under them until every worker is dripping in spurious target-filled droppings. It’s a fiercely energetic piece which sees the cast growing more and more manic as pressure mounts until we’re left asking what all the fuss is about – but the workers know very well what’s at stake…

The comic performances of the cast are strong, and every single character made me laugh either through their playful storyline or their excellent physicality. It is of course the physical theatre approach which has made a name of this company, and their greatest strength is to be found in their inventive use of the space and themselves to create an otherworldliness which carries echoes of our own. Yet even while Happy Hour is certainly creative and bold, I’m not sure it presents the intended messages well enough – it seems to value the silly and the outlandish over the loose narrative at times and within hilarious moments of both dialogue and physicality, there are a number of moments which lose momentum and impact. The way the production descends into scenes of animalistic crawling around munching on paper (a pointed reminder of the rats analogy opening the show) is one particularly memorable scene lacking in the intelligent approach applied to the majority of the piece. That quirky approach to raising laughs has its place in this piece though, and I found a good few of the sillier moments to be well formed and well delivered, but I can’t say that the production as a whole felt as sharp and as well formed as some of its best moments; it’s a funny show, yes, but it sometimes doesn’t feel funny enough to pull off the level of silliness aimed for, creating awkwardly flat scenes within an otherwise slick show. 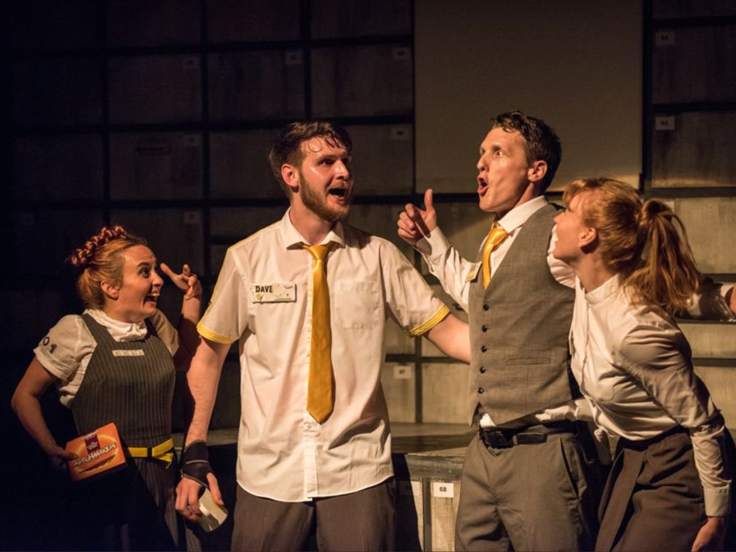 Dave, played by Charlie Hammond, is the quiet underdog and Hammond’s performance places Dave as the Mr Cellophane of the office – invisible but for the flaws which irk his co-worker Jen. That is, until Eleni Epidipi arrives to play the nameless new girl who speaks little to no English; the pair enjoy an office flirtation which gives the production some of its funniest scenes as daydreams and reality blur. Epidipi uses her small stature for the biggest laughs, delivering some excellent slap stick and perfected physical comedy. The character is mischievous and a little whacky, making the pairing with Dave all the more entertaining. Jennifer Essex is the driven and borderline obsessive Jen – defender of office supplies, loather of colleagues and bosses alike with a clear determination to become top dog. Essex’s scenes with the clumsy and well-meaning boss man Adam as he attempts to flirt/converse/bond with the team are brilliant and Adam Davies’ lead performance as Adam is tireless and very, very funny. In a character unapologetically akin to the likes of The Office’s Brent or in more recent times, Brooklyn Nine Nine’s Jake, Adam the boss beautifully captures the hollow experience of being a false figure of authority – he may wear the most smiley faces on his uniform declaring himself the leader, but the smiles he pulls from his team are as fake as his own and his power is non-existent as the omniscient voices butt in whenever they like to send him spinning into a state of panic. 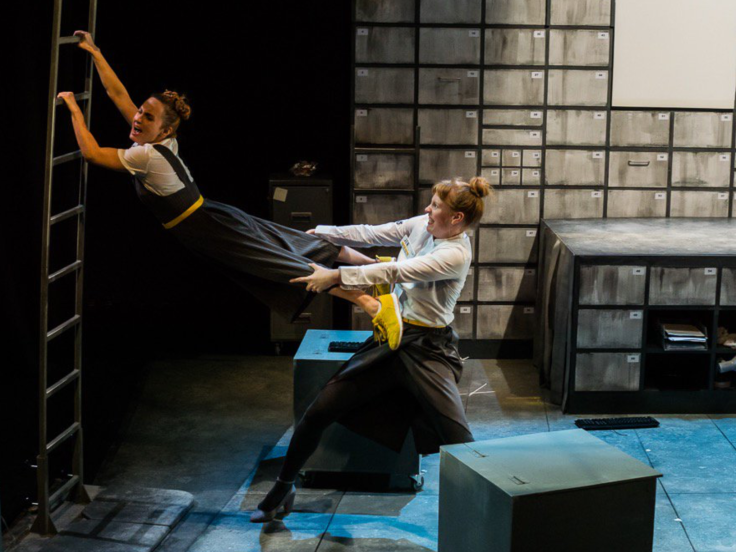 Lois Maskell’s design cleverly combines everyday office scenes in a depressing state of wear and tear with set pieces specifically designed to support the physical theatre elements for which Tmesis Theatre are renowned; ladders allow for lovely physical comedy as well as multi-functional boxes on wheels which rather heavily cling to the symbolism of every worker being boxed in, boxed up and easily replaceable. Music will interrupt the action to allow for reformation of the set and movement into the next scene – this robotic ‘all-change’ is a beautiful continuation of the excellently surreal opening scenes which see the cast arrive in wooden boxes with their limbs spilling out over the top, providing just one example of many brilliant visuals created by the company’s bold and creative approach. The show markets itself as ‘A poignant, fast paced comedy exploring our 21st century obsession with happiness’ and very nearly delivers this. For me, Happy Hour is fast-paced, enthusiastically performed and very, very funny in places. Its exploration of the modern obsession with happiness is also worthwhile and entertaining, offering up recognisable flaws within current systems for tongue in cheek ridicule. But I found no part poignant – the piece is much more silly than poignant, even with all its wonderful strengths; the clever central narrative is sometimes forfeited in favour of style over substance and is made more disjointed than is necessary. My recommendation here very much rests with your personal tastes – a fair few audience members were grumbling about the abstract, whacky nature of the show as they left but others were raving about how different and hilarious it all was – so if you’re a fan of physical theatre with a penchant for the surreal and the silly as a means of delving into intelligently selected subject matter, then it’s worth a punt I’d say! Will I see them again?Definitely – I’ve seen a lot to like in this company, so I’ll be booking to see the next for sure.

Happy Hour is commissioned by Unity Theatre, Liverpool and you can find out about all of the latest performances and shows here.