Timberlake Wertenbaker’s Our Country’s Good is based on The Playmaker by Thomas Keneally which is a classic approach to the play-within-a-play trend. It’s the unusual and fascinating subject matter which gives this play its pull; taking audiences back in time to settings untraveled by law abiding citizens: the convict colonies erected in Australia in the Eighteenth Century. The convicts we see are biscuit stealers, pickpockets and whores; their crimes are tame by and large but their punishment is devastatingly extreme. Lashings and hangings are frequent in this place and most will never see Britain again. The men are humiliated and the women become the personal whores of the soldiers – it takes one soldier’s belief in the power of theatre to reform a character to encourage some of the most problematic convicts in the colony to turn their attentions to something new.

Conflict arises within the ranks as soldiers bicker over the fruits and drawbacks of filling convict time with something largely considered to be silly and lenient. But the benefits of the rehearsal process are soon observed and the convicts begin to evolve and feel something besides the desperation of their situation. It’s a play about transformations, reformation and hope – the convicts are not lost causes, nor should they be dismissed as without worth. It demonstrates the importance of listening rather than dismissing; by working with the convicts in re-assigned roles of actors and director, perceptions and relationships shift for the betterment of all. It’s also a play which preaches through a fine balance of drama and comedy; punishment can include efforts to change and the arts have the power to create change and promote self-worth; all very universal and timeless, making Our Country’s Good a production never too far from our stages.

I love the irony that despite all the intense characters and loud voices of the men (Colin Connor’s intense rage as Major Robbie Ross is particularly impressive) in Our Country’s Good, the female characters are generally better written. Sapphire Joy and Gbemisola Ikumelo demonstrate this to be fact with their performances of Mary Brenham and Liz Morden respectively. Joy’s Brenham undergoes a transformation before our eyes – from a defeated victim of her situation clinging to ideals of love and decency to someone who can raise her head and find some kind of happiness in whatever form it appears. Ikumelo’s Morden is an unstoppable force of nature – all blind fury and readiness to fight for her place at the slightest perception of a challenge, to an eloquent actress who articulates her feelings and stands her ground in a way that even the hardened and ignorant soldiers can respect. I think of all the performances, Ikumelo’s journey as the deeply troubled soul that is Liz Borden will prove to be the most memorable. 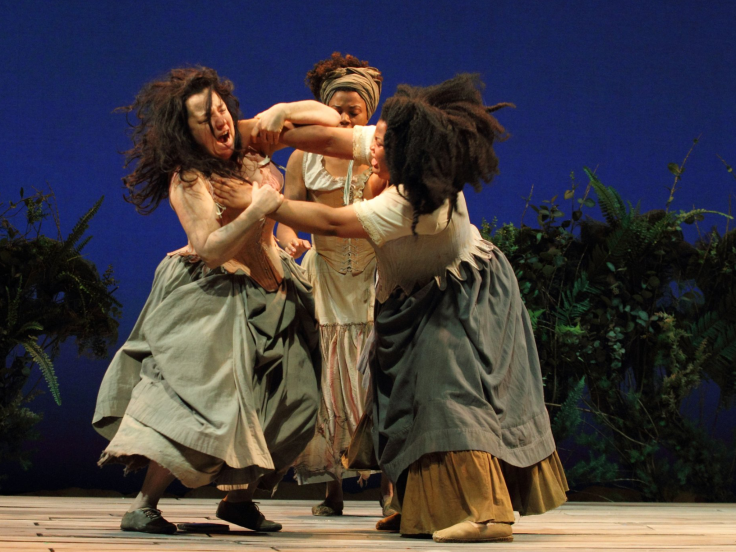 Other notable performances in this large cast include Fifi Garfield’s performance as Dabby Bryant, which takes shape as a petulant teenager, creating some nice moments of comedy as she flails her arms and twists her face in a huff over her part in the play. Interpreting for Garfield is Caroline Parker, who also interprets for a range of characters, and she manages to deliver Dabby’s lines with as much verbal frustration as Garfield demonstrates physically in an impressively fine-tuned dynamic. Parker also makes her mark as Meg Long, more bawdily referred to as ‘shitty Meg’ – a character every bit as colourful with language as with personality. Garry Robson’s portrayal of the troubled Midshipman Harry Brewer is suitably intense and Emily Rose Salter’s characterisation of Duckling Smith is spot on – conflicted and desperate to the last. Tim Pritchett shines in his delivery of Second Lieutenant Ralph Clark’s anxieties regarding both his play and his love interest – his challenging of the equally amorous John Wisehammer, played by Tom Dawze, rightly gains generous laughs. And finally, Alex Nowak proves himself to be a great comic talent as Robert Sideway in a portrayal akin to the over-eager Bottom in Shakespeare’s A Midsummer Night’s Dream.

I do have to add that this production directed by Fiona Buffini is a game changer in my perception of the world of accessible theatre. When I think about how productions tend to approach accessibility, I think of captioning and perhaps a BSL signer at the very edge of the action. This co-production of Our Country’s Good from Nottingham Playhouse Theatre Company and Ramps on the Moon brings accessibility into the folds more completely than any other production I’ve seen. Apparently, ‘A Ramps on the Moon production is one with a large cast and a well-known title, with at least 50% of the cast being D/deaf and disabled and every performance being accessible to every member of the audience’. The whole production is signed by the cast (BSL creative consultant: Paula Garfield) as the scenes play out; those who can sign do so as they speak, some performers sign and have another cast member interpret for the audience; the actor expressing the emotions with body while the interpreter delivers the emotion verbally. At times, those who can’t sign have their exchanges signed by cast members sitting on stage. It’s brilliance in the world of inclusivity and while unusual to behold at first, it’s wonderful to see these features so well embedded that they become completely natural to the performance.

The captioning screens are on the sidelines of course ( Audio Description script by Milton Lopes), and that captioning also appears on set, projected onto fabric at one point. But the constant inclusion of signing in various forms demonstrates exactly how productions can champion inclusivity within performance on the stage rather than sidelining audience members seeking accessibility, causing them to withdraw from the action in order to see the dialogue. Designer Neil Murray also advocates for inclusivity, conjuring the island simply, with bare boards and careful use of levels, incorporating a ramp to cater for all physical needs of the cast. Set pieces are also simply designed, with fabrics flown in to create tents or portable pieces like a row boat appear and disappear swiftly, keeping the production moving smoothly without unnecessary clutter. It demonstrates once more the many possibilities of joined up thinking within creative teams.

This is a layered production of a classic text which champions for the same values it depicts in its narrative. It’s funny, it’s informative and it has some important things to say which reflect on the state of Britain then and now. To close, a trigger warning: there’s bawdiness aplenty and some eyebrow raising blue language as well as some genuine filth, so be prepared for some smutty humour and you’ll be fine…

Our Country’s Good plays at West Yorkshire Playhouse until April 21st 2018 before continuing its tour. You can find your tickets here.

One thought on “Our Country’s Good: An Accessibility Game Changer”