If I Say Jump is a quirky new comedy which puts an interesting spin on the whole ‘vicar helping in the community’ trope. Leeds based company Common Chorus in association with Little Mighty bring to the stage a story inspired by director Simon Brewis’ experiences working with attendees at an addiction recovery centre through the characters of Jenny and Danny. Jenny is the new vicar and although very capable, calm and collected on the surface, she is refreshingly free with her language when not in the pulpit – not quite stretching to a potty mouth but certainly well versed in the power of colourful language to express depth of emotion… Danny is a recovering alcoholic with anger issues and when he finds himself in a pickle involving a punch, a gun and a brick, he turns to Jenny for support, and she in turn juggles her own personal struggles and supporting Danny with his. They’re both recovering from life’s disappointments, but their recoveries pave the way for great comedy and in a production never less than entertaining and consistently funny throughout, Lynsey Jones and Richard Galloway prove themselves to be a brilliant and dynamic comedy duo.

Dick Bonham’s writing is full of wit and those brilliant quick-fire exchanges which manage to capture the angst of human experience with bite while flashing those pearly whites. The piece is a combination of narration in role and subsequent scenes played out with eyes firmly on the goal of gaining laughs at the rate of an old sitcom Laugh Track. The action freezes, slows and shifts in a way which makes the whole piece feel very thoroughbred – one character freezes while the other narrates, and the freeze switch is so slick you hardly notice the glaring departure from naturalism. It’s an impressive dynamic; the story feels contemporary and domestic but the delivery is decidedly stylised, discarding any mundanity which might otherwise arise if this were a drama as opposed to comedy. Simon Brewis’ direction has Jones and Galloway ever on their toes and flitting across the stage like fireflies in a mason jar; their delivery of the narrative maintains impressive speed throughout, with very few lulls. Jones and Galloway are also impressive multi-rolers who switch into minor roles which often happen to be intertwined with their primary characters already in the scene. With skilful physicality, they plant their primary character in one position, before shifting into their secondary character, taking care to maintain the illusion that the primary character is still in position; it’s mime on a wonderfully slick level.

As Jenny, Lynsey Jones is instantly relatable and likeable; she quickly tests the boundaries of our perceptions of those donning the dog collar and Bonham’s writing taps into the delightful glory of seeing someone so tied up with righteousness and good behaviour show human exasperation in all the colours of the rainbow. As the numbskull Benson’s bride to be, she’s superbly dense with a hilarious dose of verbal diarrhoea in the space where self-awareness should be. Galloway is equally brilliant as Danny who is troubled but desperate to make a change. Anger is the ‘monkey’ in his brain which constantly challenges his good decisions and sometimes succeeds in leading him astray – his continuing journey to recovery is evident in his decidedly more comical acts of ‘violence’. Galloway’s portrayal of Jenny’s estranged and overbearing husband is thoroughly brilliant; while hilariously tragic and risible, he’s also infuriatingly patronising and borders on abusive. He’s a fantastically well written character and his desperate attempts to regain Jenny put me in danger of losing my eyesight, so powerful were the eye rolls – hat off to Galloway for such a spot on rendition of every entitled and deluded egotist ever… I certainly felt like giving him a good kick in the shin on Jenny’s behalf! 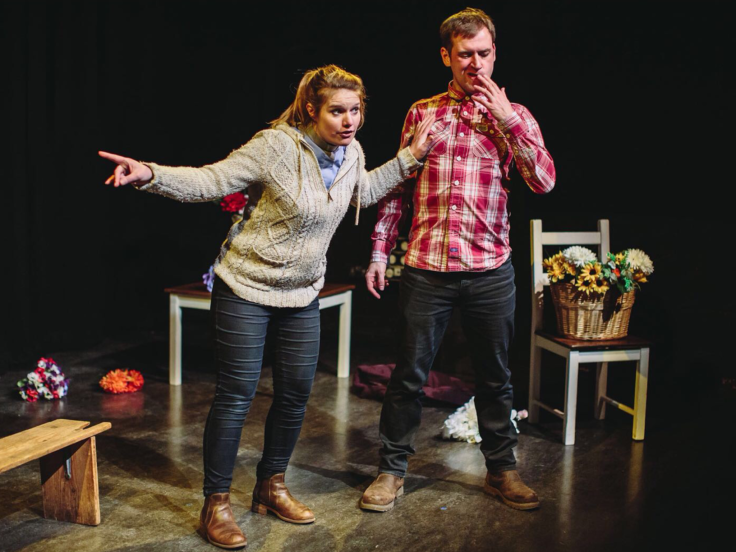 While the narrative does throw up interesting issues for contemplation, the real beauty of the piece lies in the observational comedy of the script and the physicality. Jenny’s arc highlights religion’s susceptibility to manipulation for personal gain; the limitations of good will when a good deed calls into question both morality and legality as well as the emotional impact of a relentless partner refusing to let go. Danny’s journey reminds us that people with good hearts can do bad things; that recovering from addiction is constant work and that a friend’s loyalty provides great opportunities for laughter. As a studio production, this is an impressive piece of theatre and I think If I Say Jump would not be out of place on main stage – it’s certainly a lively and well produced production worthy of further development and perhaps even a wider tour. For now though, If I Say Jump tours Yorkshire until May 12th and you can find tour dates and tickets here.

2 thoughts on “Review: If I Say Jump at Leeds Carriageworks Theatre”