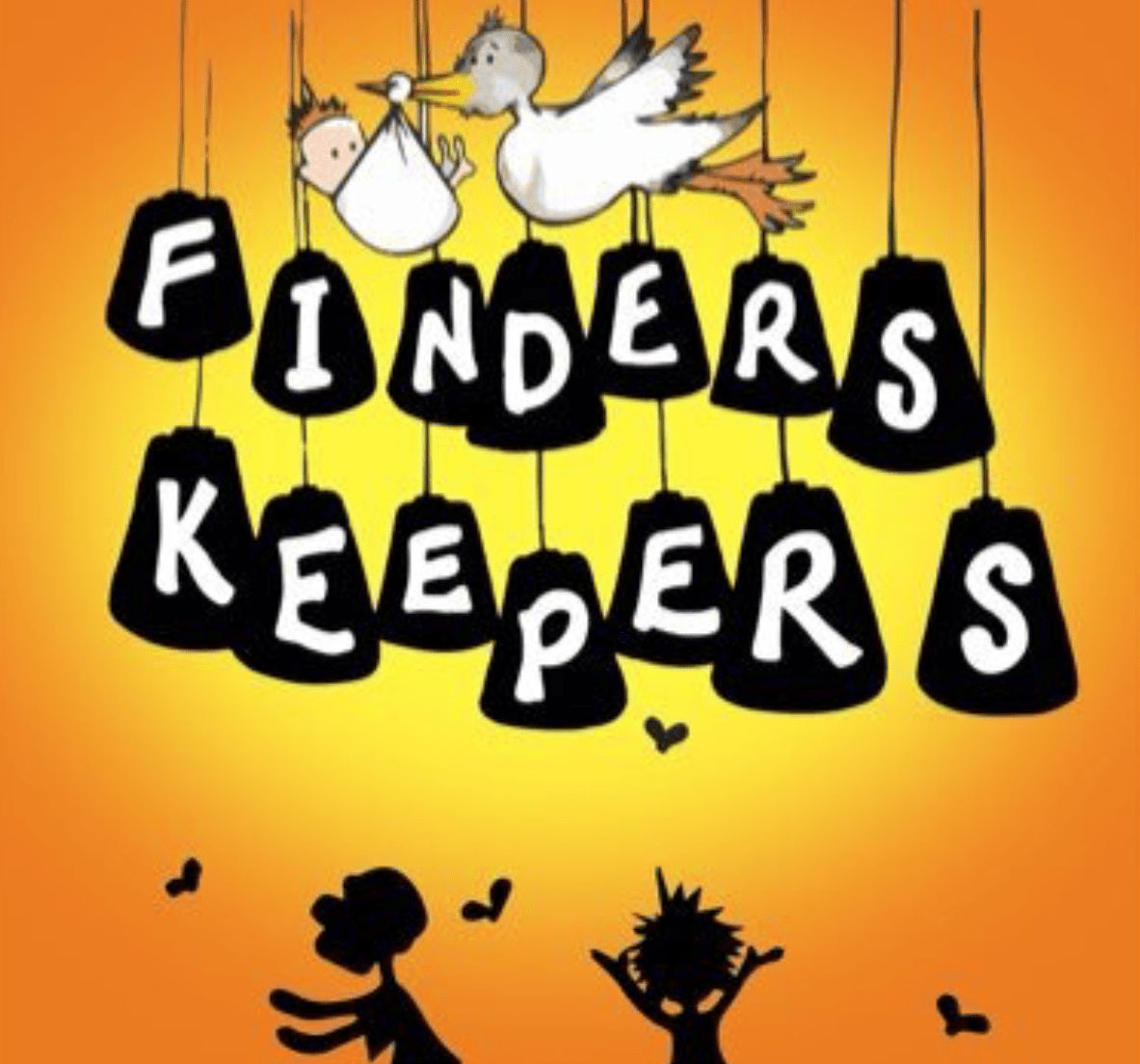 Hot Coals Theatre bring a unique combination of gross grubbiness and heart to the land of Children’s Theatre with their production of Finders Keepers. Set on a junkyard where father and daughter live with and in squalor but not without fun, the pair find themselves caring for an abandoned baby. Newspapers strewn about the stage contextualise the baby abandonment as being the result of a ban on baby boys within the nearby community our characters do not associate with. The pair get to grips with keeping a baby alive and well just as the brave mother returns to collect and run away with her little one. A physical piece directed by Caroline Parker which replaces dialogue with grunts, music, mime and puppetry, this two hander does well to tell what is quite an emotionally complex story.

Beginning with some physical comedy as father and daughter awake and go about their morning routines, the pair seem to seek the comic impact of the grubby Twits but instead resemble the old school cartoon of Ren and Stimpy as they eat flies, use a kitchen knife both to shave thick hair from under the armpits and to clean teeth. There’s also the morning wees to be done, filing of nails over breakfast, the flicking of ear wax and the spitting of tea directly into the face – not to mention the flicking of porridge at each other and the audience. I won’t lie: this grubby approach to physical comedy is uncomfortable viewing at times as the grim habits of the dirty pair goes on for just a little too long and it has to be said that the titters and ‘ewwws’ intended to be gained from the audience of youngsters were only audible a couple of times despite the lengthy scenes. I don’t think I’m particularly prudish when it comes to such silly and tongue in cheek scenes – and I am well aware that this is a kids’ show aimed at the bullseye of bodily functions as chuckle inducers -but I think there came a point when the ‘we do a bunch of disgusting things every morning’ joke was over, but it kept going…

Once the pair have gained gold in the poor personal hygiene Olympics, the real narrative begins as a woman in labour appears. Leaving the baby next to the sleeping daughter, she scarpers. Claire Louise-English does a wonderful job of playing both the doddery dad and the sad, helpless mother. Caressing the little one before gently leaving him to be cared for in the safety of an anonymous residence, she manages to bypass any judgement by showing the love and care felt towards the baby. Jo Sargeant has a strong stomach to be able to deliver the grim stunts of her character; eating cold porridge in supersized portions, having cold tea spat at her and eating the bread straight out of Louise-English’s mouth, it’s a selfless performance which must make her crave a speedy shower after the applause ends. She also manages to communicate the more gentle side of her character as she spends time with her beloved teddy bear and quickly becomes attached to the child. There are also some synchronised sequences demonstrating some strong physical theatre skills and both Sargeant and Louise-English provoke big laughs through Bottom-esque slapstick, complete with chases and mild comical violence. Upon discovering the little one, our female dump dweller sets about keeping this treasure to herself – hiding him from her father before relenting and allowing them to work together to figure this crying thing in a basket out. The mothers on both sides of me audibly gasped and clutched their little ones closer as the girl on stage thrust the baby into a trunk and slammed it shut with a deafening blow. It’s a slightly questionable choice to depict such a thing in a kids’ show I feel, but perhaps I’m just being an over-sensitive party pooper…but then again, perhaps there was a place for a ‘don’t try this at home with your baby sister kids!’ placard before this show… Y’know – ‘flick all the earwax and porridge you like haha, but, er, be more careful with very little people haha’… Other slightly tone deaf aspects can be found in both the production and the marketing – I’m pretty sure ‘tramps’ became an un-PC term a while ago and though ‘junkyard dwellers’ isn’t as concise, it’s a better option than something considered to be offensive, surely? Books held up by the father as he scrambles to care for the tot offer some perplexing moments too – the discovery of ‘How to be a Single Parent’ includes copper coins pouring from the pages – perhaps an attempt to engage the grown ups and perhaps funny to a few, but more than a little out of place here – and I heard no laughs.

The real heart of the piece is found in the gradual lessons learned as the pair care for the baby- laughs are more generous as the young audience enjoy the battles with crying and rivalry as they each want to hold the bouncing bundle of wailing. Feeding time and nappy changes are conquered and a bond grows. There’s a beautiful and funny sequence as the cast flit about the stage between blackouts, with lights coming up to reveal father, daughter and baby in various family snap shots, documenting the time spent with the new addition to the family creatively and with a great sense of sentiment and warmth. When the mother returns, there is a sobering scene of silent understanding and the child is relinquished with deep sadness from our protagonist and great joy from our troubled mother. The daughter subsequently flies the nest full of hope, leaving the father to continue his contented life of bliss sorting through junk and eating rats.

Finders Keepers has many strengths and undoubtedly entertains the young and the silly, but there are issues within the narrative for me. While the cast carry the piece with some great variety and surprising complexity, this ambitious and commendably layered story is undermined by some odd decisions. Yes, the cast showcase some great physical theatre, lovely comic timing and pacy action – based on which I’d definitely like to see something else from this company – but I remain perplexed by some of the choices made here.