With the touring production of George’s Marvellous Medicine, it’s a case of good old fashioned family fun – with plenty of modernised moments. Curve Leicester and Rose Productions present David Wood’s adaptation of Roald Dahl’s beloved story with simplicity and accessibility. The adaptation offers up one of Dahl’s most whacky magical stories to the modern age; Grandma and George can be seen flaunting their best ‘dabs’, ‘nae nae’s’ and ‘stanky leggs’… Grandma rocks up on a mobile scooter looking like a cast member from Albert Square – all leopard print and bling. She teeters over to her bag in pink glittery trainers to fetch her selfie stick for a family snap. Composer Tasha Taylor-Johnson provides punchy accompaniment which paves the way to some ‘hip’ musical segues. Such modern revisions don’t harm Dahl’s original tale though and they blend surprisingly well with a story long considered a classic – we certainly wouldn’t ever want the work of Roald Dahl to be termed old and stuffy like that Shakespeare fellow would we? No, no – bring on the rapping and the selfie sticks say I – but all ye purists and protectors of authentic reproductions, look away now! George is played with barrels of enthusiasm by the boyish Preston Nyman, whose engagement with the young audience is excellent. He becomes something of a rock star as the tale develops, delivering George’s ditties as something close to slowed rap, putting both arms in the air until he resembles a DJ at a rave, he demands involvement: – ‘In?’ – ‘In!’ The audience yell back. As Dahl’s mischievous hard done by boy, Nyman gives the production an easy, relatable and funny hero. George is an innocent bystander until his mean old Granny shows up to pester and pick on him and it’s Lisa Howard who provides our grouchy, acidic Grandma. Full of demands and a constantly puckering, grimacing and snarling mouth, Howard plays the role for the biggest and best laughs – with her biting quips and death stares inspiring equal giddy laughter. Catherine Morris is every bit the hysterical mother, making great use of silly faces to delight the youngsters enjoying the chaotic scenes as they unfold. Justin Wiltman is more rational as George’s Dad and provides great fodder for Grandma. Matthew Coulton and Chandni Mistry join the fun as various ensemble roles, most notably as scientists in white coats as they arrive to help the audience advise George about the contents of his marvellous medicine. But it is Chandni Mistry who steals the show at various points as a great over grown chicken with a madness to her clucks which never fail to have the audience in stitches – when coupled with Mistry’s expertly whacky facial expressions, there is nothing to do but laugh as she struts about the stage in all her marvellous ridiculousness. 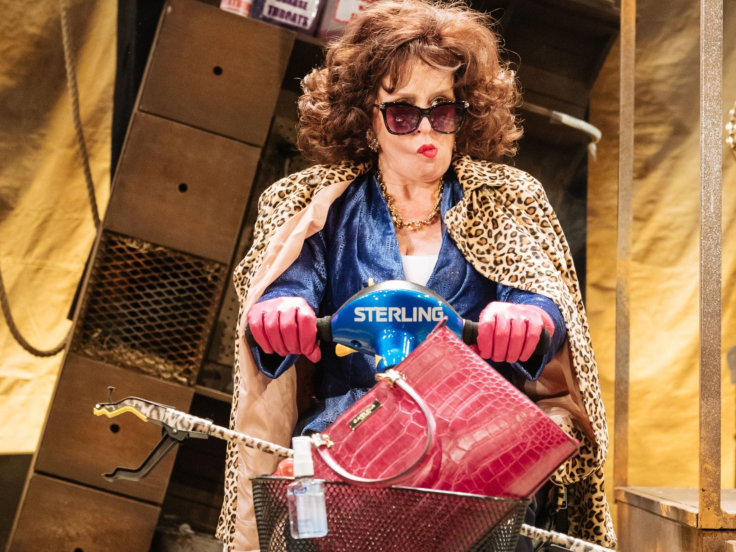 Director Julia Thomas has the young audience in mind every step of the way here; the set (Morgan Large) is basic in reality but seems cavernous enough to hold a great many exciting things. Actors are constantly on the move, running back and forth to ensure fidgety little ones don’t start to flag. Performances are big and loud with little room for the more subtle development needed to make this show appealing for a wider age range. Action is pacy and there’s an abundance of the actors engaging with the audience directly. The funniest moments are extended and weaker plot points are swift; stage sorcery is glorified with flashes, smoke and speedy exits while the whole piece plays out within a giant cooking pot, complete with splashes and bubbles surrounding the central stage space. If you’re wondering how they ‘grow’ Grandma, look to Designer Morgan Large, as it’s a case of costume and set trickery; but if you’re intrigued to know how they ‘shrink’ Grandma, look to Video Designer Andrzej Goulding, who makes impressive use of a towering set piece holding not one but four TV screens… It does get a little Charlie and the Chocolate Factory at times – but I’ll say no more… Puppet Maker Edd Lindley provides quirky characters of the poultry variety and there are laughs to be had every time George’s marvellous medicine is put to the test via chicken. For me personally, I’d have liked to see this production pitched a little higher – Dahl’s stories are wonderful for most young ages, but productions which do justice to the darker side of Dahl’s characters and capers tend to be more interesting and inventive. This production preserves the real bitterness between the father and the mother in law, as Grandma is labelled an old cow and so on, but there’s no real threat or cruelty to the characters; Grandma is eventually unmasked as witch woman but throughout, the production favours light and bright over anything more thrillingly sinister. What we have here is a well produced, typical children’s show – very much in the tone and style of panto, with great big bold strokes and very obvious, accessible plot development. A fun, simple take on a simple tale with a keen eye on keeping young eyes bright and shiny, this is a lovely family show – particularly for the youngest of the family.

George’s Marvellous Medicine plays at West Yorkshire Playhouse until March 17th and you can get your tickets here. The show will then continue to tour, and you can find more information here.