Still Alice is a devastatingly good drama – with dramatic emphasis on the devastating. It’s the first show in West Yorkshire Playhouse’s one of a kind Festival, Every Third Minute (‘a festival of theatre, dementia and hope’) which highlights the experiences of those living with dementia – specifically through the eyes of those living with it via consultation during the creative process or within performances themselves. Still Alice also draws attention to the need for support for those living with dementia, not just the people supporting those with the disease.

It’s shocking to learn how quickly the person at the centre of everything is removed from the discussion or the decision making. This adaptation of Lisa Genova’s novel by Christine Mary Dunford is all heart and at 90 minutes with no interval, it retains the intensity and impact of the full novel without being over-ambitious in its adaptation.

The production follows Alice over the course of just a few years as living with dementia goes from a mildly concerning experience to a life-changing shift which leaves Alice with only snatches of memories. Sharon Small brings the journey of Young-Onset Alzheimer’s up close and uncomfortably personal in a performance both captivating and powerful; it’s deeply moving to see the impact on both this highly accomplished intellectual and her family as each of them struggle to come to terms with the unexpected arrival of such a fast moving and ruthless disease. 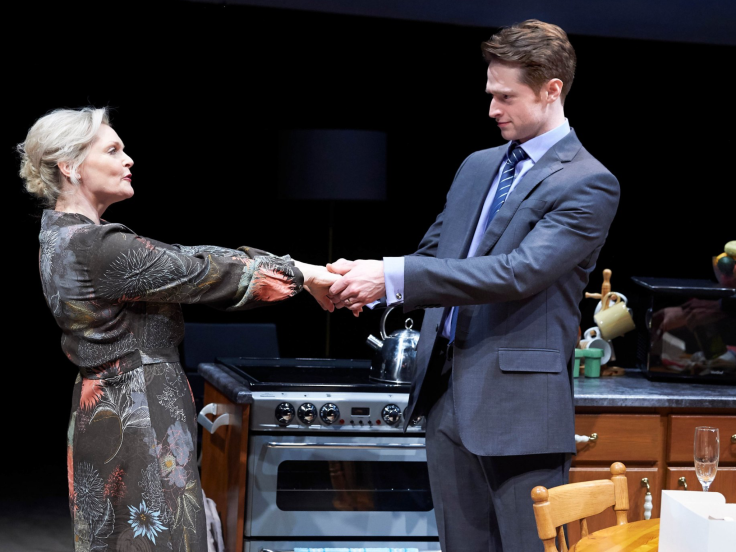 Small’s performance is nothing short of outstanding; delicately forceful but really excelling during the most emotional scenes, and with the sad stillness of some scenes more powerful than any words could muster. A look, a pause, a heavenward glance – Small’s subtlety is beautiful and she makes the story reach out and pinch you in the small of your spine. The fact that Alice is an almost constant on stage makes Small’s performance all the more impressive – it’s a performance as unrelenting as the experiences depicted.

This adaptation approaches the task of presenting Alice’s experience with perceptive insight and a stylish choice too. The internal Alice is thrust outwards and played with quiet impact by Ruth Gemmell. Gemmell poignantly captures the inner struggle Alice increasingly faces – as Herself, she consoles, supports and pushes Alice to challenge herself. It takes a little getting used to to watch two Alices (who don’t look alike) but the device proves successful for both brief moments of humour and for deepening the wounds of darker moments. David Grindley’s direction places great weight on Alice’s relationship with herself, and while early on Alice finds the funnier side of some of her mishaps, she craves re-assurance from Herself which she is increasingly unable to provide. John, Alice’s husband, is played by Dominic Mafham in a way which forces us to contemplate what we might wish for ourselves and our loved ones in his situation. His struggle means juggling the needs of everyone while quietly preparing himself for a life after the love of his life. Like Alice, he’s a high flying intellectual chasing big breaks in academia. Mafham brings the tragedy of the whole situation to the forefront of the play as his quiet strength and can-do attitude slowly dissipates.

Beth and Thomas, the children, are played by Alaïs Lawson and Andrew Rothney respectively and the pair offer up the sense of desperation felt by the youngest members of the family as they’re faced with the premature loss of the bedrock of their youth. Angst and silly frictions are set aside and the two must make the most of their time with Alice while she is lucid. Conflict between their own approaches provides additional drama which only serves to intensify the sense of tragedy pervading the closing scenes. Highlighted by the children and father though is the strength of the family unit when placed under extreme pressure; unity isn’t a constant, but they’re all seeking the comfort of reassurance.

Jonathan Grindley‘s set design is a perfectly in sync reflection of the narrative; a curved screen dominates the whole upper half of the backdrop, and on this dates are projected to demonstrate the passing of time. It looms above the action like Alice’s headspace – changing hues of the clouds indicate moods and when the final scene arrives, the colour is almost too subtle to be seen.

At first glance too, the stage is littered with the makings of various scenes all at once. In clusters are the set pieces for a kitchen, a doctor’s surgery, a bedroom and each dotted about as indications of what’s to come. Gradually these pieces are shifted just a few inches to allow them to be the focal point for each scene but gradually, they stop being returned to their original positions. Some are removed entirely and others are left in new positions, offering a physical representation of how Alice’s world is changing – how her home of 25 years becomes unfamiliar as the kitchen units spread out wider and wider.

Eventually, we are left with just Alice, her husband and a couple of deck chairs. A cloudy sky of pale, nondescript blue is all that remains beside. Alice’s world has disappeared, along with her memory and her sense of self. The extension of her thoughts, Herself, is nowhere to be seen, despite promising to never leave her. It’s a devastating final scene to a deeply affecting play which deserves to be seen and to be recognised for the important piece that it is. 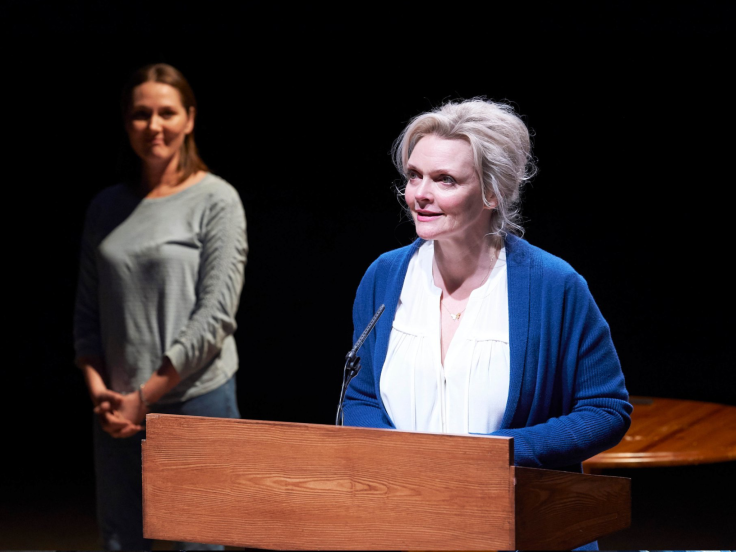 Why is Still Alice so affecting? I think because the disease it depicts is so traumatically affecting. Imagine having to re-live some of the most traumatic moments of your life because your mind buried the memory and your loved ones are forced to break your heart… Imagine having to be the one to break your loved one’s heart in that way… That scene, and others like it, had me doing that involuntary heave that takes you by surprise – where you skip the moved lump in your throat and go straight to a brief choke. Emotions don’t just run high on the stage here – audience members could be seen checking on each other throughout as tears fell and hearts broke – presumably many have been personally effected by this undiscerning thief of time and experience. Such reactions are a testament to the delicate, perceptive handling of this sensitive and important subject, and a great testament to the sheer force of Sharon Small’s performance.

Still Alice plays at West Yorkshire Playhouse until March 3rd, and you can get your tickets here.