Follies is a towering musical of grandeur and escapism; a classic musical with book by James Goldman, music and lyrics from the great Stephen Sondheim and directed by Dominic Cooke, the National Theatre has brought Follies back to life in exquisite style. The opening sequence is transcendent to say the least; a vision in white appears atop a staircase without any sign of introduction – their appearance instantaneously hushes the chattering audience, and the magic commences… We are transported into a muted, ethereal world of gentle movement and emphatic femininity as Follies in gorgeous costumes evoke a lost era of decadence as the women move with grace and an abundance of dainty, affected wrist movements. Every foot is planted with the most delicate energy, as if the stage were made of priceless art and the very soles of their feet as of much worth as their incredible extravagant costumes. They take their sweet time on a continually revolving stage, posing and pausing until 2017 slips away and old time spectacle and nostalgia takes its place. 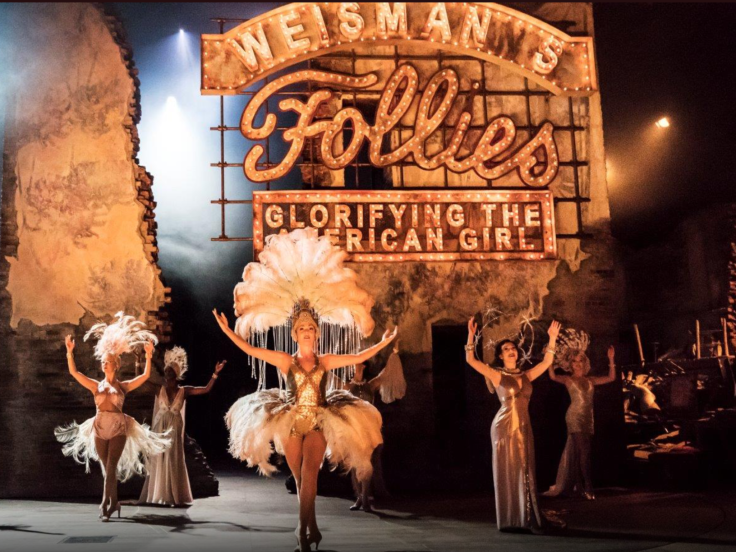 Follies debuted in 1971 and evokes the early days of Florenz Zeigfield alongside the present day Follies, clad in stylish 70s designs while their young self parades around as a vision of perfect feminine allure. The fashions of the 1910s onwards are beautifully captured by Vicki Mortimer’s designs, with each woman representing a different time period but all and each connected by scale, sparkle and feathers. The tones are uniformly soft; no garish colours, just sensual fabrics in pastel colours to perpetuate the ideal of sensitive, delicate beauty. The ensemble likewise don the same subtle tones while their costumes are exaggerated visions of page boys and seventeenth century shoes and ruffles. As the opening sequence of slowing the pace of the world closes, the Follies as they are now, arrive for a reunion before the theatre is torn down to be replaced with offices; a sign of the times and the final nail in the coffin of their glamorous pasts. The women receive sashes on arrival to signal their era of Folly stardom and they half giddily, half resignedly survey their surroundings. The women in the present carry the air of a Folly girl in dresses in variations of feminine gentility – some provocative while others are more demure or serve to signal the change of pace in their lives away from the lights and the limelight. 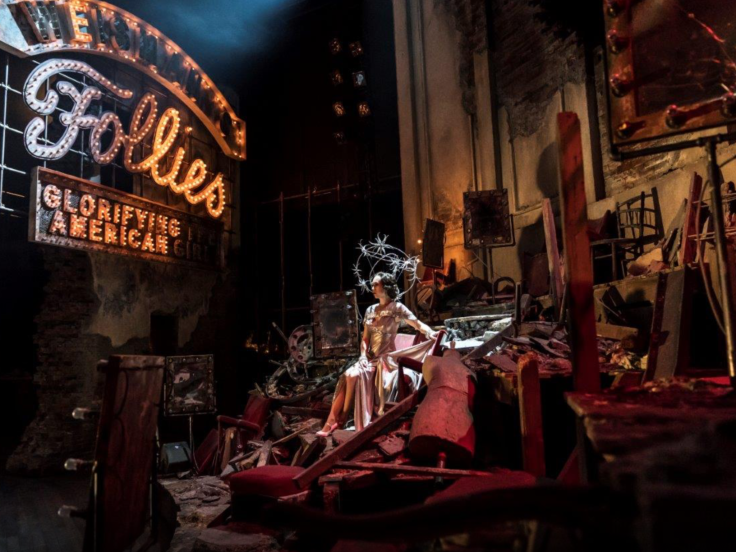 Each character is given a moment to shine, usually with an ascending, soaring Sondheim number which cries ‘Look what the girl still has – I’m still here, and I’m fabulous damn it!’ Our four central protagonists are shadows of their former selves in one way or another and over the course of the production, they battle demons both alone and in fiery altercations, complimenting the razzle dazzle of the past with emotion and real drama. The ever show-stopping Imelda Staunton flusters onto the stage as Sally Durant Plummer in a manic haze of delight at having left her now-simple life to return to the bright and shiny big apple. The character lives quite a rollercoaster and is tragically deluded beneath a comically enraptured and over-excited exterior. The past pains follow her around and as she seeks to rectify mistakes, she only deepens the wounds. Staunton’s performance is full of darkness and light and she delivers each song with gripping emotion and some beautiful, pure tones, with the famous Losing My Mind delivered with wide-eyed pain and fear as she looks back at the past and ahead to the future. Young Sally, played by Alex Young, mirrors Staunton’s upbeat, giddy nature to show that age doesn’t always make a person unrecognisable, but it can make suffering last. Young captures Sally’s desperation with great feeling and when the pair unite for dramatic scenes of heartbreak, they demonstrate the power of stylish, surreal staging. Janie Dee is a force of nature as Phyllis Rogers Stone; tempestuous, formidable and merciless, she speaks her mind and confronts the disappointments of her life with unabashed brutality. She takes prisoners resentfully and interrogates them in her attempts to find new meaning in a life she feels bereft of purpose and joy. Her performance of Could I Leave You is perhaps the funniest but also one of the most emotional moments of the show and her unrelenting tone is superb. She switches up the pace when she impresses with The Story of Lucy and Jessie as a temptress with wisdom, telling the story of two disillusioned women while dancing up a storm in a provocative dress accentuating the lasting sex appeal from her Folly days. Dee’s voice is versatIle and handles both numbers with zest, growling out her rage or drawing out a word in a husky whisper. Her younger self, played by Zizi Strallen, joins her in a spectacular, high energy number and they deliver a sublime sequence in perfect, perfect unison. Strallen’s portrayal of the younger Phyllis gives us an insight into a softer, care-free model of a woman now almost joyless. We see young Phyllis in love, light on her feet and basking in the experience of youth while present day Phyllis looks on with the sharp eyes of reality. 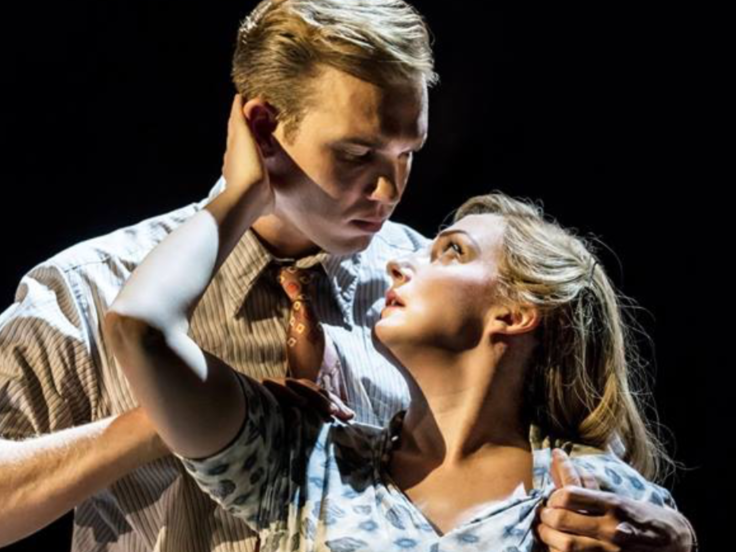 The husbands Ben Stone and Buddy Plummer, played by Philip Quast and Peter Forbes respectively, make solid counterparts for the spinning top wives; harassed and troubled with disillusionment leading them to poor life choices, the pair make terrific victims of fate and deliver their musical numbers with heavy irony or a heavy heart. Their young selves are played by Adam Rhys-Charles and Fred Haig and that pair again reflect characters lighter in their step and much softer as people, with Rhys-Charles playing the handsome heart-throb toying with hearts with aggressive passion. The stage is a veritable feast of seasoned talent; Bruce Graham offers a rousing introduction to the Follies with a brief but forceful solo to illustrate the grand sights and sounds in the world of Follies. Tracie Bennett gives her all as the ex-sauce-pot Carlotta Campion in I’m Still Here while Dawn Hope gives a gripping performance of Who’s That Woman? As Stella Deems, the showgirl delighting in still knocking one of her old numbers out of the park and way over the hills. Di Botcher was a surprise for me; I’ve adored her TV roles, particularly in Stella, but she proves herself to be a powerful belter in this production with a defiant rendition of Broadway Baby as Hattie Walker. Norma Attalah is a delight as Emily Whitman, the woman relishing every moment of being back in the folds of Follies, grinning ear to ear as she taps out a twee little number. Josephine Barstow gives a truly beautiful operatic performance of One More Kiss as Heidi Schiller. The rendition of One More Kiss is powerful in more ways than one and the harmonies reached when Barstow is joined by Heidi’s younger self, the impressive Alison Langer, brought a tear to my eye. The sight of the pair of them, side by side, with voices joining to create such a height of beauty and such swelling power to make the rafters ring in applause is a poignant highlight. 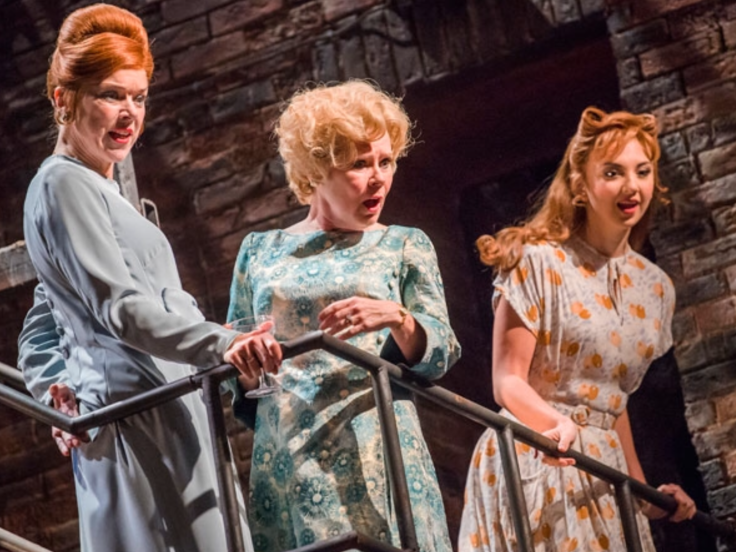 There are familiar themes here, with frictions in friendship and love toying with happiness and while youth and beauty abound, disillusionment and drama wait slyly in the wings. With age comes hindsight and a reluctance to stay stuck in a rut, cueing ultimatums and stylish intertwining of our disillusioned characters in the here and now shadowed by their younger counterparts. They re-live the moments leading to the present, interacting with memories to blur the lines and to make the poignancy of the contrast all the more potent. Even while the present plays out in the foreground, we see the Follies of the past parading around in the ruins of the theatre in the background, keeping the memories spot-lit as the future looms. But even with familiar traits, Follies refuses to sit in line and sets itself apart in delightful ways. Here we have times gone by brought to life with ethereal style and sublime costuming alongside something rather unique and special for a 2017 stage; women past their twenties, some much further away than others, given moment after moment to shine front and centre in large scale musical numbers. To play a collection of Follies returning to say goodbye, the production needs a cast of seasoned performers, providing a modern audience with a rather rare opportunity for a sizeable cast of more mature performers to strut their musical talents across the stage while generally speaking, actresses of their ages are more likely to be found in altogether more reserved roles. The Follies must say goodbye to the past, yes, but the talented, formidable cast are very much belting ‘hello’ as a reminder to us all what we could have on our stages if we only produce the material. I remember seeing Whoopi Goldberg talking about how all of the nuns in Sister Act had been wonderful stage actresses and had been cast in the movie as an homage of sorts to the women celebrated and side-lined in their careers; Follies feels in the same vein for me. That’s not to say that the impressive, accomplished cast have been side-lined in their careers, far from it – it’s purely the emphasis on musical talent; the big musical numbers that they belt out with perfected delivery that they get to do only because Sondheim wrote Follies and the National Theatre decided to create this indulgent staging of it. So let’s have more of this, shall we? So does Follies live up to the hype? Has the National Theatre delivered the indulgent grandeur promised? Absolutely. In returning Follies to the stage, they have managed not only to celebrate a classic musical and a classic age of show business, they have highlighted something remiss in contemporary theatre; youth deserves a platform and up and coming stars deserve to shine, but by golly, there are actresses out there well deserving of a show-stopper and talented enough to carry a show if only someone would write them. The musical finds a strong balance between glorifying the beautiful artifice of the stage and offering up the inescapable drama of life as the characters reach existential crisis in between numbers. It doesn’t quite reach perfection, with some scenes worthy of editing down and a lack of movement sometimes blocking characters from view or key moments, but it’s pretty darn close. It has great heart, sights, sounds and some superb cutting one liners that hang in the air long after they are said. Book Follies to escape to a different world and a different time; bask in the performances of formidable women and delight in the wonderful possibilities of ambitious theatre.

Follies plays at the National Theatre until January 3rd and although the run is pretty much sold out, you can try to get your tickets here !

6 thoughts on “Review: Follies at the National Theatre”