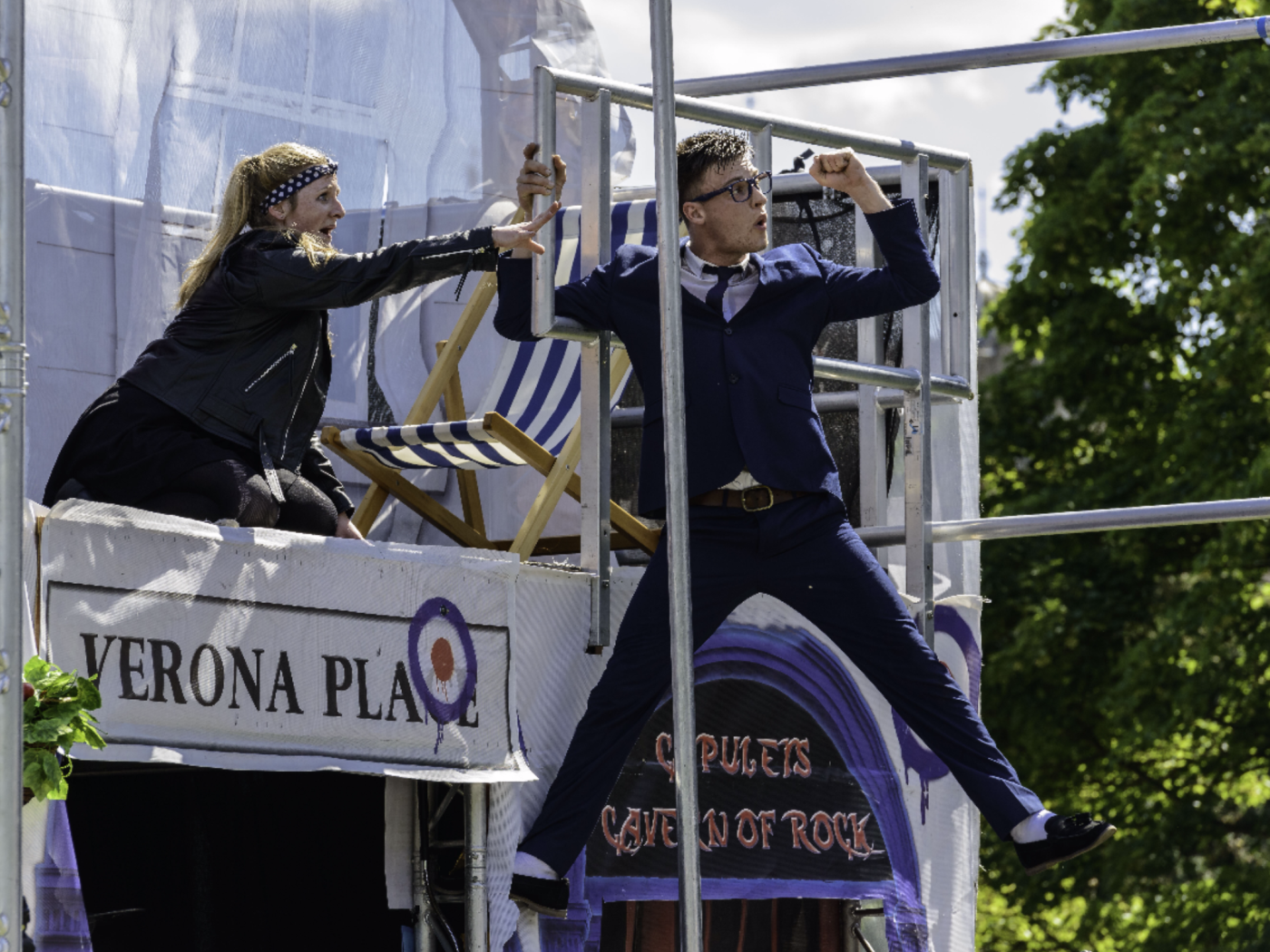 Well, Oddsocks have gone and done it again! Approaching one of Shakespeare’s most famous plays, Romeo and Juliet, they decided, naturally, to frame the whole story as a Mods and Rockers themed farce. Does that work? Well, yes actually! In the beautiful outdoor setting of Harlow Carr Gardens, despite a little rain, this small company of six demonstrated with flair two distinct things; an awful lot can come from a little yet very well designed portable set, and that any Shakespeare play can be transformed into a hilarious, accessible performance under the whimsical, fearless spell of Oddsocks.

All ye purists, look away now… While it may take some a little time to acclimatise to the gleeful playfulness of Oddsocks’ somewhat panto-esque approach to the bard, there can be no denying that their take on Shakespeare is funny. There’s no real tragic ending in an Oddsocks adaptation as far As I can tell – their thirst for fun and light heartedness means that genuine tragedy is a stranger while comic tragedy is lovingly glorified – yes, even in the tragedies. The production had the audience grinning, snickering and laughing out loud throughout, and with good reason. The physicality alone is so well choreographed by Director Andy Barrow and Fight Director Dr Ian Stapleton that it is at times impossible not to laugh. The visual gags are a delight and their quick witted reactions to anything happening in the audience are an authentic treat – as is the mischievous and engaging audience interaction. But the hilarity doesn’t stop there with Oddsocks; there are modern ad-libs and revisions (the ball is a Capulet-owned Rocker club for instance), puns and plenty of songs injected into the scenes (with live music I might add). The latter aspect of Oddsocks productions perhaps shone brighter in their production of Macbeth, which I saw last year, but that is perhaps down to the era of music selected for the Mods and Rockers context.

Matthew Burns plays Romeo as a lovable geek with above average anxiety readings and decidedly little poise; his is not a suave, slicked-back haired Casanova of a Romeo, this is a modern day take on the innocent youth falling in love with clumsy abandon. Burns is charming, brow raisingly energetic and hilarious in the role; his physical gags land as perfectly as his carefully delivered takes on Shakespeare’s famous lines. In the eponymous role of Juliet, Pippa Lewis also extracts plenty of laughs via her overly dramatic portrayal of a teenager hopelessly and desperately in love with a complete stranger. Like Burns, she’s a natural in making Shakespeare’s language accessible and credible to a modern audience viewing a modern adaptation – although her Juliet does rely on stereotypical traits and speech patterns of a teen more than Burns’ Romeo, who seems to have greater depth despite the comic-centric characterisation.

Regular Oddsocks player Rebecca Little again delights with her portrayal of Juliet’s nurse and various other roles. She’s a master of using Shakespeare’s language in ways which are both engaging and refreshing to the ears while her comic talents have all the markers of a seasoned professional, making her performance a highlight of the production. Andy Barrow does not just direct the tour de force performance of the Oddsocks company, he takes centre stage as Capulet and Tybalt to showcase his many talents; there is one particular scene in this production when he is multi-roling as boss and worker, and it’s a brilliant showcase of both Barrow’s skilful directorial eye and his comic talent. His gravelly booming voice makes him perfect for the proclamatory style of Oddsocks and like the rest of the cast, his handling of the language is one of the greatest strengths of the production. Alexander Bean plays Friar Lawrence and adds a playful layer to the character, which somehow makes him seem all the more wise – but this take on the Friar is also more exasperated by the moronic behaviour of the youngsters! I’d like to see more of Gavin Harrison, who rib-ticklingly plays Count Paris with all the ill-placed confidence and smugness of a Trump advisor – but with better costumes (Vanessa Anderson MA)!

I wanted this production to live up to expectations bred from last year’s production of Macbeth (review here), and I was not disappointed; Oddsocks are a fantastic company who take something classic, insert weird and wacky modern revisions for plenty of laughs and all the while still allowing the beauty of Shakespeare’s original to take a bow. Fantastic. If you get the chance and you’ve never clicked with ‘stuffy’ Shakespeare, go and see this brilliantly entertaining company modernise and radicalise those classics  – they are an absolute joy to watch!

You can find information about the touring productions and tickets here.