Wednesday 17th May, 2017 at Leeds Grand Theatre and Opera House

Believe it or not, this was my first ever experience of Evita. I haven’t seen the film, nor had I seen the stage show, and now that I have, I can see why it’s still going strong… Evita has stood the test of time well; although it does feel dated, it’s the kind of dated associated with a classic style rather than being a detrimental quality – Evita carries an elegant charm with grativas and warmth, as well as grit and plenty of sharpened tongues (which must entertain audiences of any generation). This production, directed by Bob Tomson and Bill Kenwright, places a powerhouse of a leading lady, Emma Hatton, centre stage to carry the weight of this much loved production; it is sharp, delivered with painstaking attention to detail and features nuanced, precise choreography to the tune of perfection. Bill Deamer’s sultry, snappy, vibrant and coy choreography really makes the ensemble a significant force on the stage whether they are in foreground or background. The venom of the aristocratic women towards the ascending Eva is glorious and the sound of the men roars with somewhat risible male entitlement. Although never presented as a heroine or dove, Eva is not entirely without sympathy and it is the hissing performances of the supporting cast which allows Hatton to present Eva’s layers with credibility. That said, Emma Hatton is a thoroughly jaw dropping leading lady; a powerful voice which can be tender, saucy, raging or tragic, it’s pure magic to watch how Hatton demands the eyes and attention of all. She dismisses with a sneering nonchalance both painful and comical to watch while managing to clutch at the sympathy of an unsympathetic crowd with just enough angst and a relatable rock-and-a-hard-place dichotomy. She also handles the energetic scenes of Act 1 with seductive passion and poise before switching to an altogether more sobering, pained performance in Act 2, which presents a stark shift in tone and pace as Eva’s premature death looms. Hatton beautifully presents this story of the rags-to-riches girl with the sardonic twist of ruthlessness and an icy core built of gritty determination for self betterment. Playing a character who is so glaringly self serving while managing to fall just short of being thoroughly unlikeable is a tricky tightrope, and Hatton has certainly mastered it in this role.

Also impressive is Sarah O’Connor, who knocks the mistress’ tragic ballad out of the theatre and up into the clouds -poignant, moving and arrestingly vulnerable, her performance is a real highlight. George Arvidson, playing Peron, captures both the intelligence and the naivity of the politician-husband of an ambitious, beautiful and powerful wife who would give Lady Macbeth a run for her money when it comes to the self serving bulldozing of nearest and dearest. His deep voice and sense of permanent, safe neutrality gave both his dialogue and musical performances gravitas and dignity and despite his evident youth, Arvidson’s performance certainly gives Peron that reserved, assured nature which arrives with age and privilege. Gian Marco Schiaretti plays Che and while he has a fantastic voice and plays the role with real grit and angst, forcefully holding Eva to account with unrelenting pressure, I would have liked to see more versatility in the role – surely the character doesn’t need to be so full of rage that the angry brow and curled lip become permanent? It’s a brilliant role and Schiaretti played it very well of course, but it did at times feel a little two dimensional.

Tim Rice’s lyrics are famous and well-loved while Lloyd Webber’s compositions are just as enveloping as his other hits (who leaves the theatre after seeing Evita without involuntarily humming the biggest number, as with Phantom and Cats?). I thoroughly enjoyed the sass of ‘Good Night and Thank You’, the undeniable zest in ‘Buenos Aires’ and the beauty of ‘Don’t Cry For Me Argentina’, yet there were snatches of some songs which struck me as heavy handed in what is otherwise a gorgeously scored musical. It was also frustrating to lose some of the gentler harmonies and even some of the dialogue owing to an over-exuberant horned instrument with an overly generous mic volume, but that’s hardly the fault of the production – it just leaves me with a few unfortunate gaps…(not enough gaps to make my recommendation questionable though, she quickly adds!) 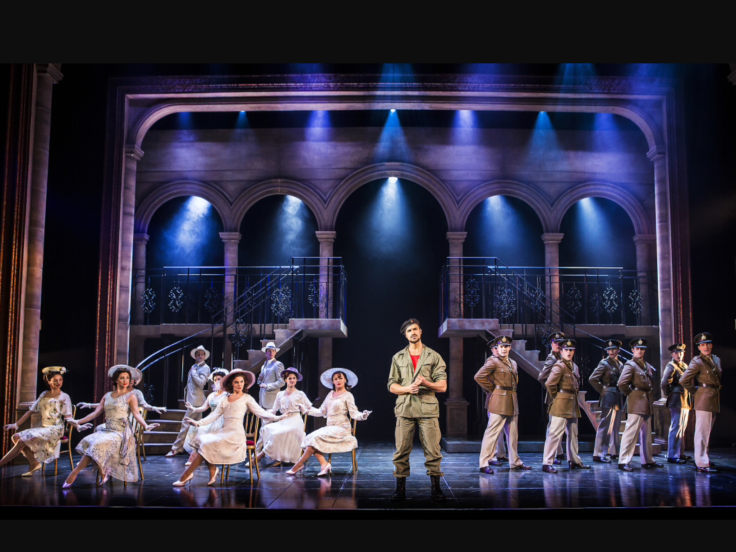 Matthew Wright’s set designs are sprawling, elegant and perfectly atmospheric. I could imagine how much more slick and fluent this production would be if it were in residence at a theatre rather than a touring production; that staircase moving forward was a moment of glorious anticipation and if it was so brilliant as was, I can imagine with glee the impact it could have minus the stage hands! Costumes were as pristine as the cast as they donned up to 8 (I’m guessing) costumes each, with quick changes galore. Costuming of the aristocrats was brilliant; floating, feminine, fragile summer dresses entirely in line no doubt with their flattering self image and yet evidently at odds with the ugliness of their snobbery. The designs were perfect for the period; reflections of class and circumstance as well as indicative of tensions somehow while Eva’s costumes were extravagantly beautiful and immaculately produced by some unknown yet talented hands.

This is a time-tested success of a musical from the golden vaults of class, charm and total escapism to another time and place. The visual of this production is rich; the music famously beautiful; the story covers good ground; the cast are superb and the leading lady a true gem of musical theatre – should you go and see Evita? Yes!

One thought on “Review: Evita (Tour)”