Few shows truly deserve the ‘whirlwind’ title, and Dreamgirls is one of those few – a phenomenally talented cast lead a phenomenal creative team to great heights with this relentlessly fiery production. The impression given is that there is not a single sequin out of place in this dazzling affair (and there are many, many sequins) – there is an enduring feeling of quality and perfection which pervades in Dreamgirls; it’s quite simply a stunning success.

The energy and slick transitions throughout mean that the passage of time is evident only by the house lights – and that’s a special thing for any show to accomplish. Yet with the pace of the show primarily being set to ‘full steam ahead’, the more poignant moments are beautifully stripped back, giving the piece an emotive depth often missing from such sequin-clad productions as this. Dreamgirls is a truly spectacular piece of musical theatre, and that’s down to a slick combination of top quality talent from every department in theatre.

Tim Hatley’s set design is mesmerising; constantly changing set pieces are flown in and out with breath-taking speed and precision as the production sweeps through the narrative like a Catherine Wheel. Closely entwined with this set design are the prominent lighting sequences, as designed by Hugh Vanstone. All alone, the glorious, vibrant lighting is enough to stun the senses, but factor in costumes which must surely have endangered Swarovski’s ability to cater for any other client, and you’ve got a show which is in the truest sense, an absolute feast for the eyes as much as it is for the ears. The costumes (Gregg Barnes) are stunning – covering all of the emotional bases through wardrobe alone; chaste A lined dresses to start, followed swiftly by elegant, slinky gowns as the girls mature from Dreamgirls to the Dreams, and sassy, confident numbers to signal the leap from aspirers bona fide stars. The costumes catch the ample wattage of lighting beautifully and the overall impact of all that sparkle and light is delightfully seductive in its ability to grip the audience entirely, with some of the suits worn by the male cast were likely more heavily adorned with sequins and the like than some of the female counterparts. I thoroughly enjoyed the consistent generosity of flair and style across the costuming of the cast as a whole, it’s not a very rare thing to do, but it’s rare enough to be noticeable here. 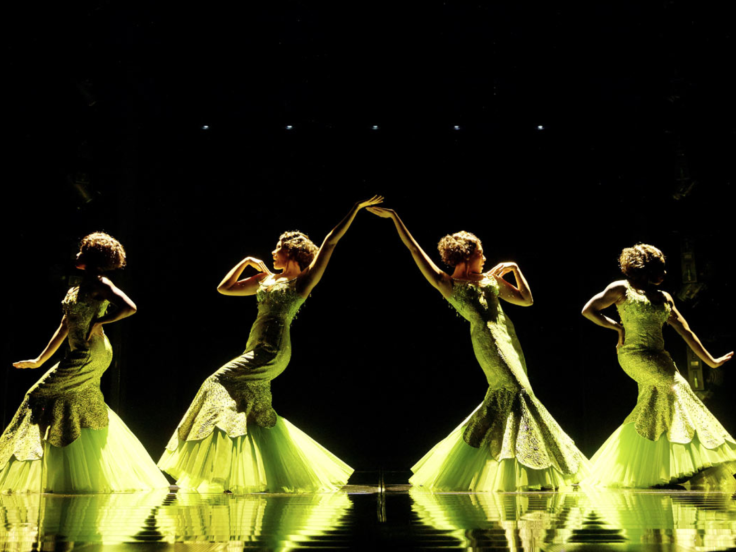 Direction and choreography for this marvellous show are the work of Casey Nicholaw, who has led this cast to an indisputable triumph; injecting every scene with both class and a loaded energy (be that dramatic, comical or musical). Simple choices have great impact – most notable is the decision to have other acts perform in the background as the main cast are foregrounded for their ‘backstage’ scenes; an excellent way to capture the non-stop atmosphere while also providing apt live underscoring for the scenes. The costuming and scene change trickery complete with lighting manipulation in Effie’s big number is a masterclass in how to build beautiful moments as a savvy, creative team. Likewise, the montage in the finale is beautifully done – I found myself thinking, more than once, what a classy show this is.

The music of Dreamgirls is fantastic; it’s colourful and gripping, there’s no doubt about it, yet this production will surprise those who only know of the film version; brace yourself for great new songs and freshly impressive takes on the originals. There’s also no doubt that Dreamgirls is lucky to have someone who rivals the top powerful vocalists of musical theatre: the much raved about Miss Amber Riley. As Effie White, Riley is a powerhouse across all categories. Her belts are as full-bodied and soulful as any other ‘diva’ type that I’ve seen and she filled the space effortlessly with number after number, never losing the rich intensity of it despite the sassy growls and the considerable number of full-belts required for the role. Riley also has some of the sweetest softer tones to be heard in this show as well as some of the funniest and the most poignant scenes, which is yet more evidence of how phenomenal her performance was; it was her name on everyone’s lips as they left that theatre, and for good reason. 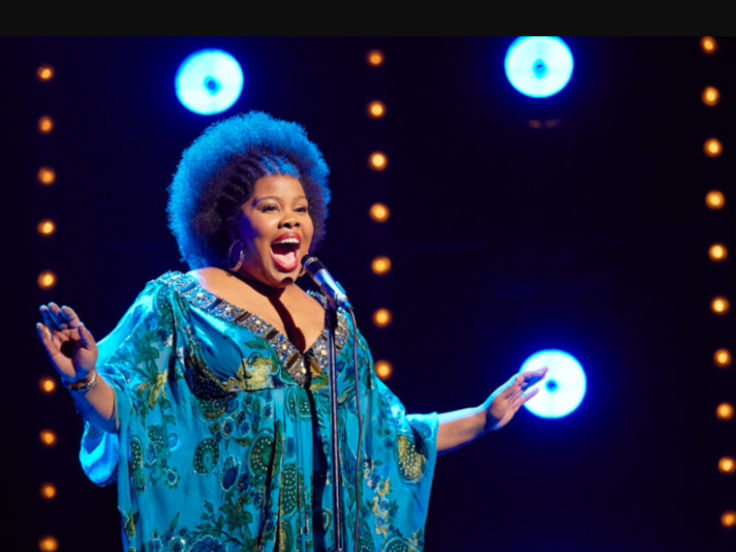 Deena Jones is played by the fantastic Liisi LaFontaine, who developed the transition from sweet, naive Deena early on, to the enlightened, forceful Deena of later scenes with great credibility. By far the most impressive, glorious moment of this show for me was the performance of ‘Listen’ (with revised lyrics, for those of you with the movie in mind) in which Riley and LaFontaine delivered the most show-stopping duet that I have ever seen on a stage. It was stunning – and I mean that – I sat stunned in genuine awe after they blew the roof off that theatre and sent it spinning off into the great unknown. Riley of course gave heart-stopping performances of ‘I’m Changing’ and And I am Telling You I’m Not Going’, but I’M telling YOU, it’s worth seeing this show purely to experience the live, enveloping power of that particular moment of theatrical magic.

For this performance, Jocasta Almgill was playing Lorrell Robinson, and she was brilliant; funny, sugar sweet and suitably no-nonsense later on. Almgill gave us all yet another example of why the speaker of any comments about the inferiority of an understudy should hush up; talent is talent, and Jocasta Almgill has it in abundance. Speaking of abundant talent…Adam J. Bernard is an absolute firecracker of a performer! Playing Jimmy Early, he was utterly brilliant from start to finish – hilarious, outrageous and deeply defensive in equal measure, with an incredible set of pipes to boot. The energy Bernard heaps into this production is brow-tuggingly awe-inspiring and he sparkled particularly brightly in a blindingly brilliant show.

Joe Aaron Reid’s performance as Curtis Taylor Jr. was refreshing; his Curtis has much more sinister undertones than I was expecting, but that darkness only served to give the production more depth. Reid’s portrayal suggests an uncomfortably obsessive side to Curtis’ love for Deena and his performance packed a pleasantly surprising punch. I’m already a big fan of Tyrone Huntley, having seen him in both Sister Act and Memphis previously, and it was a delight to see him showcase once more what a gifted actor he is – he gives his characters such impressive sincerity, and his performance as C.C White was both multi-faceted and deeply endearing. He also has a fantastic, spine-curlingly beautiful, moving voice, in case you don’t know that already – I’m so glad to see him getting more and more recognition in the West End.

So… Dreamgirls most definitely lives up to the hype. Why? Because it boasts some of the most spectacular musical numbers to be found in the West End while playing host to a stellar cast and one particularly stunning vocalist in particular – Ms. Amber Riley. I sincerely hope that Dreamgirls is headed for a substantial residence in the West End – it most certainly deserves it. GO! GO! GO!

One thought on “Dreamgirls: Maximum, Dazzling Wattage from Start to Finish”