A musical (very loosely) based on my favourite movie? Fantastic. Seeing it a second time with THE Whoopi Goldberg as Mother Superior? Priceless.

This show was a dazzling example of a feel-good, fun-loving musical. The story was changed in a number of ways compared to the original 1992 movie, with a big change being that the production did not manage to secure the rights to have those classic Motown hits in the show so it had a brand new score. There are also minor plot changes and character name changes, but the basic skeletal plot remains and any tweaks do work – without exception.

I had first seen the production when Sheila Hancock was playing Mother Superior and I have to say that I thought Hancock did a wonderful job, I liked the fact that she added more soft edges to the character….but then of course, there came along Ms. Whoopi… and that was a thrilling thing to behold.

Goldberg returned to the convent as Mother Superior (the fabulous Dame Maggie Smith in the original). A wise decision was made to change the show a little, having Whoopi appear at the start with a comical little monologue beginning ‘Dear God. It’s me…again’- a lovely touch which allowed the audience to show their Whoopi-appreciation nice and early without interrupting the illusion of the show once we were knee-deep. I thought Whoopi’s rendition of Mother Superior was a classic and a clear re-brand of Dame Maggie’s famous original- and indeed, the character herself. This Mother Superior, though a little mean to Deloris through necessity, was funny, fun and most importantly, had Whoopi’s charismatic spin on the role. It was pretty fascinating to see her adapt to this role having played Deloris.

Set design for this show was also utterly brilliant, with every nook and cranny of space was used. I was thoroughly impressed with this aspect of the production – the chase scene in particular being a strong visual memory even after six years have passed. Likewise, the hugely talented Alan Menken composed some beautiful musical numbers for this show, as well as some more toe-tapping, hip-wiggling tunes too. ‘Sister Act’ and ‘Raise Your Voice’ are particular favourites. 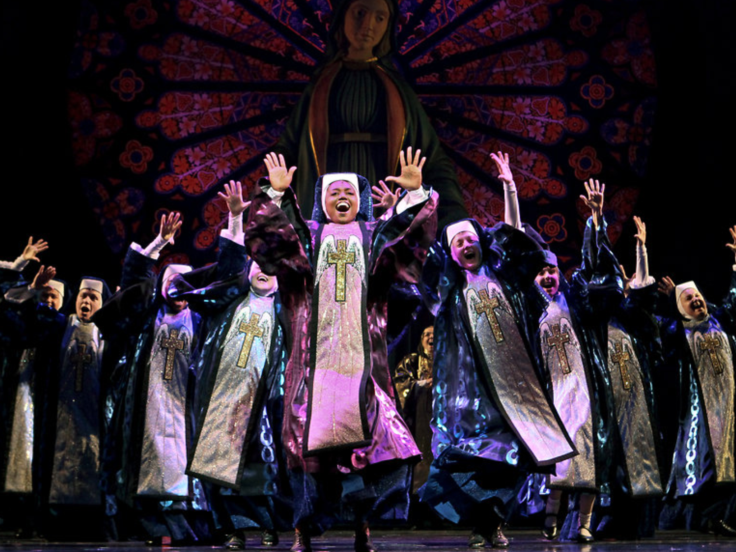 It was a cracking cast too. Patina Miller had sass, wit and a phenomenal vocal talent as the lead, Deloris Van Cartier. As the diva divine, however, she was not the only star to shine on the Palladium stage in this production. Ako Mitchell as ‘Sweaty’ Eddie (loosely based on Bill Nunn’s character in the original) was beautifully endearing as the hopeless romantic shakily and precariously fumbling to hold on to the flame he carried for Deloris (another slight shift from the movie). His rendition of ‘I Could Be That Guy’ was a sugar-sweet highlight for me.

Claire Greenway as Sister Mary Patrick was brilliantly entertaining as she took the reigns from the fabulously talented Kathy Najimy, who played the role originally. Hilarious has rarely been so aptly applied; a spot-on stage rendition of a larger than life character. Sister Mary Robert (Wendy Makkena in the original), played by the sweetly gifted songbird Katie Rowley Jones, was given significantly more attention in this production compared to the original, taking on a protege role as she gazes, starry-eyed, at the fearless and fabulous Van Cartier. I particularly enjoyed the back story in ‘The Life I Never Led’, something that provides much of the fleeting poignancy in this show.

Perhaps the most notable transposition of a character from the screen to the stage is Sister Mary Lazarus (played by the wonderful Mary Wickes in the film). The bitingly stoic original became a liquor-guzzling, gambling rapster in this production and despite my love for the movie, this not only worked but it was a raving success, with ‘Do the Sacred Mass’ being one of the biggest laughs of the night. Vince (Harvey Keitel in the original) becomes Shank in this version and was played by Simon Webb. I remember thinking that Webb could have played the role with a little more grit, but the roles of Shank and his three minions, Bones (Nicolas Colicos), Dinero (Ivan De Freitas) and TJ (Thomas Goodridge) are much more comical in this rendition. I loved the bosom-shaped red chair as a ripe source of comedy with the sleazy and ineffectual mob men.

Overall, this show was a genuine joy to see. Set? Superb. Casting and performances? Brilliant across the board. Vocals, and particularly harmonies? Sublime. This show is certainly one of the very best I’ve seen in the West End. If you enjoy big talent, big characters and bigger voices, and you are looking for something that will genuinely make you grin like the Cheshire Cat (and you’re willing to accept that this is not an exact stage replica of the original), then you should take yourself to see this glorious and divine show whenever it next emerges.

To close, I have an important question for those with the power to make great theatre happen: will there be a stage rendition of the fantastic sequel, Sister Act 2: Back in the Habit? Whoopi Goldberg? Stage Entertainment? Anyone? Is this thing on? Now waaaa-aaaait a minute!